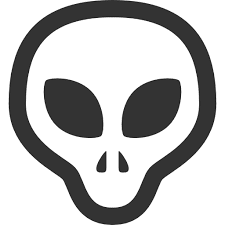 In August 1970, before the first of human achievements listed on space.com, the Straits Times published a drawing of an alien in a spacesuit as frontpage headline news! Imagine that! The Singapore national newspaper!

Here's the evidence....since the words of the articles are so tiny, I shall transcribe them for you so you don't have to scratch your eyeballs out! Now, take a deep breath... 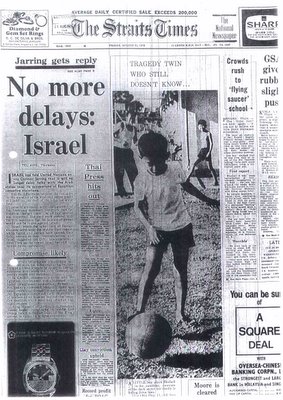 Text from page 1 Penang, Thurs - The "little men" are here again - if you are to believe six Bukit Mertajam schoolboys. The boys, all students of Stowell English Primary School, claimed that a soup-plate sized flying saucer landed near them as they were playing "cops and robbers" in the bush beside the school yesterday evening. One boy claimed that he was even shot at by one of the five "horrible looking" three-inch space Lilliputians, using a miniscule space gun.

Whether it was mass hallucination or overwrought imagination of the boys - the tale has gripped the whole Bukit Mertajam district in Central Province Wellesley with flying saucer fever. By tonight, hundreds of people were converging on the school, which was forced to shut its gates. This is the first report of a Malaysian "landing" of a flying saucer since a similar story of "little men" being found near a Johore Bahru school last year. The six boys who reported their unearthly brush wiith the tiny spacemen were : Mohamad Zulkini, 11; Abdul Rahim, 10; David Tan, 9, Sulaiman, 10; Vikneswaran, 10, and Mohamed Ali, 8.

We went back to the scene at about 630 this morning and found the saucer still there, surrounded by the spacemen" said Zulkifi today. "They were only about three inches high but they looked horrible," he added. Another boy, Mohamed Ali, told the headmaster, Mr. Ooi Keat Guan, that one of the spacement took... 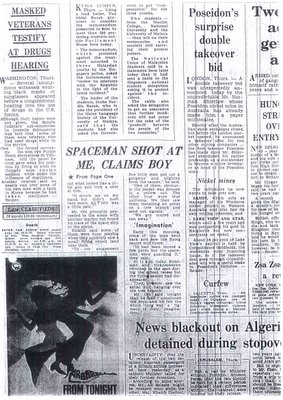 Heading :SPACEMEN SHOT AT ME, CLAIMS BOY...out what looked like a little gun and took at shot at him. "It struck me on my hand, but didn't hurt very much. All I felt was a little pain." Mr Ooi promptly proceeded to the scene with another teacher but fond no trace of a space ship or the aliens. "To our amazement five little men put out a gangway and alighted from the saucer," he said. "One of them obviously the leader was dressed in a yellow suit. The other four wore blue uniforms. We then saw them installing an aerial on a tree branch and send out signals. "We got scared and ran away."

Early this morning, some of the boys went back adn saw the flying saucer still there. "It had been moved a few yards but the spacemen were guarding it," they said. At 11 a.m. today, Sulaiman abd Vickneswaran returned to the spot during the school recess but the flying saucer had disappeared. They however saw the aerial still hanging over the tree branch. Mr Ooi said tonight that he had questioned the boys and he felt the whole thing was a figment of their imagination. 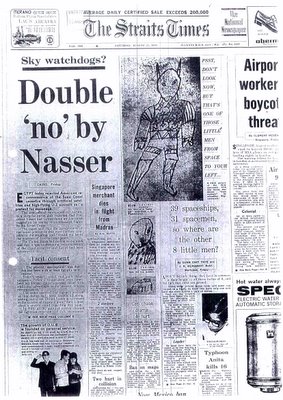 [Alien Drawing] -PSST, DON'T LOOK NOW, BUT THAT'S ONE OF THOSE LITTLE MEN FROM SPACE TO YOUR LEFT... THIS picture of the little spaceman with two horns was drawn "from memory" by schoolboy Wigneswaran.

Sub Heading : 39 spaceships, 31 spacemen, so where are the other 8 little men?

ABOUT the only thing they have in common is their height - all three inches of it, and the fact that most are armed: Some wear yellow, some blue, and some can vanish in a flash. At least two have only one arm and one even sports a pair of horns. They are the invaders from Outer Space who seem bent on swamping on this sleepy town by sheer force of numbers. The score at lunch today was 39 spaceships and 31 spacemen. Which means that at least eight spacemen are still wandering around somewhere. The invaders have all been sighted by boys from Stowell School. In blukar nearby. It was a 10-year old, K Wigneswaran, who spotted the one sporting the horns as he emerged from his spaceship yesterday.

He must have been the leader as he was wearing a yellow uniform while his four companions each with his own ship sported a more mundane shade of blue. They're pretty fierce when aroused too. The five armed with miniature space blasters and the one with horns loosed off at Wigneswaran when the youngster tried to capture him. The result? A small red dot on Wigneswaran's right leg he is proudly... 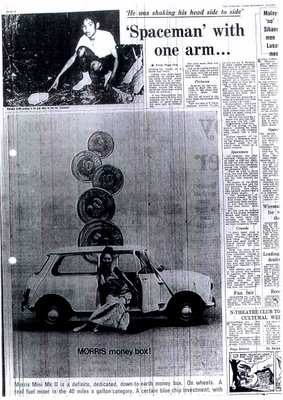 [Photo of boy pointing down] : Mohamed Arriffin pointing where he saw two "spacemen".

...showing his chums as a battle scar today. Unlike true Outer Space tradition, he fainted after the extra-terrestrial attack and woke up in a classroom. He had been discovered where he fell among the blukar outside the school perimeter fence and carried there by prefects. It was Wigneswaran who reported seeing 25 tiny men stepping out of a similar number of space ships at the same spot on Wednesday. But once more, Fate was against him. Just as he rushed forward for a better look, the school bell rang-and like all good schoolboys, Wigneswaran went back to class.

However, he has managed to draw two pictures of the aliens and their ships from memory. But not all resort to voilence when threatened with capture. Take the case of T. Veerasingham, another 10-year old and his pal, A. Devaraj, 12. After classes yesterday, they went to a spot in the blukar where there were reports of a tiny space ship landing on Wednesday. Sure enough, they saw two miniature figures, one perched on a branch, the other taking it easy on a rock on the ground. When the boys tried to gain immortality as the first pair ever to capture a spaceman, the little men simply vanished. The boys are prepared to swear in a temple that they are telling the truth. Veerasingham, who tried to capture the one on the branch said "He was about three inches high and the branch was about three feet from the ground. "He, too, was wearing a yellow suit and had only one arm - his left. I am very definite I saw him. "He was sitting on the branch shaking his head from side to side clasping what looked like a tiny gun". Another casualty of the invasion is Mohamed Ariffin bin Mokhtar, seven, an afternoon pupil at the school whose father is a police corporal.

Cpl. Mohktar bin Haki Talib said :"When he returned home at 6.30 last night, he told my wife and me he had seen two tiny spacemen among the blukar outside the perimeter fence. "When he tried to catch them, one shot him. He had a small cut on his left hand and my wife treated the wound." Six pupils of the school reported they first saw the tiny spacemen on Wednesday evening. Five aliens, they claimed, landed from a blue flying saucer. The headmaster of Stowell School, Mr Ooi Keat Guan, said he had questioned them carefully and they all insisted that their stories were true. Mr. Ooi said he brought two of the pupils, Mohamed Shukri and Abdul Rahim, to the scene again this morning, and they still maintained that they had not been imaging things.

"I don't know what to think", Mr Ooi said pensively. "Frankly, I don't believe them. They might have seen some leaves or insects moving and mistaken them for tiny spacemen." When the news spread yesterday, thousands of curious onlookers flocked to blukar outside the school compound to examine the spot where the tiny spaceship were reported to have landed. CID officers also called at the school this morning to question the boys. There was such big crowds outside the school today that the main gate was closed to prevent outsiders from getting into the compound.

Source : http://lingthemerciless.blogspot.com/2005/11/aliens-and-ufos-frontpage-news-of.html
Email ThisBlogThis!Share to TwitterShare to FacebookShare to Pinterest

..this blog is all about my passion on uncovering the truths behind the unexplained UFOs sightings and micro alien beings in Malaysia. If you have a story or a question, I can be contacted at ga3859 @ gmail . com